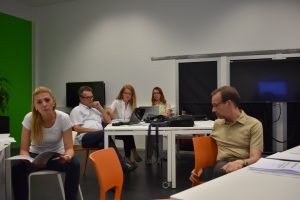 A 3-day workshop was organised withing INCLUSION project in Leuven, Belgium in June 27-29. Hosted by UC Leuven- Limburg University, the consortium members discussed the ways for developing teaching and learning methodology in terms of inclusive higher professional education. The workshop was held for PCU staff to enable them to act as online coaches.

The partners had to make a short video connected to the inclusive higher education. Each partner chose 2 topics and worked on the content of the video. During the first day the hosting university represented programs (like Camtasia for editing the video, YouTube for adding subtitles) so that to help the consortium members in the process of movie- making. The university staff also represented the main principles for video making.

During the second day the partner organisations and universities worked mainly individually on their videos. Leuven university provided editing rooms and studio to the INCLUSION consortium members for making the videos.

The third day started with coordination meeting managed by SAFAA, project coordinating institution, during of which financial and technical issues were discussed. At the end of the day, the partners showed their films and received feedback from others. The consortium members also discussed the main activities to be done after the workshop, including the draft and further development of national guideline.